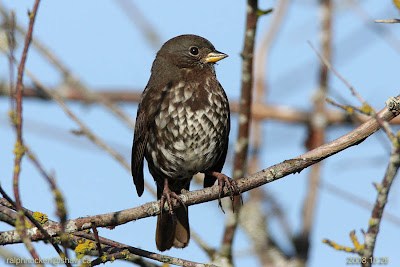 The Tuesday Bird Walk went to Rathtrevor Provincial Park in Parksville. The morning was sunny with cloudy periods and the winds were brisk from the west.
Five birders saw and heard thirty-eight species of birds.
Among the highlights of the walk were about 1000 Brant Geese flying in and out of Rathtrevor Beach all morning. Long lines of Surf Scoters and Long-tailed Ducks flew over the white caps and roaring seas, heading up the Strait of Georgia. We saw Black-bellied Plovers and Dunlin crouched close to the tideline protected from the wind and surf. Eight Turkey Vultures flew over us, a Rufous Hummingbird looked down on us from the top of a bush and a Hutton's Vireo sang from the bushes on the field near the old farmhouse. As we entered the parking area at the end of the walk we spotted a Yellow-rumped Warbler calling from a low bush.