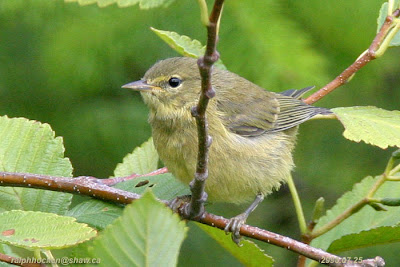 The Tuesday Bird Walk went to Springwood Park in Parksville. The morning was sunny and the winds were calm. Seventeen birders saw and heard twenty-nine species of birds.
Among the highlights of the morning were two Orange-crowned Warblers singing as we entered the trail. A Cooper's Hawk flew by very quickly. We saw a female Pileated Woodpecker excavating a nest cavity in a tall snag. Later we noticed a male Pileated Woodpecker near the same nest cavity. The Orange-crowned Warblers put in an appearance for us to see and hear them again at the end of the morning.