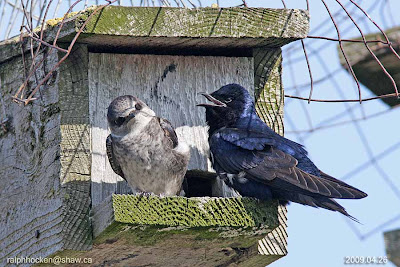 Friday May 01:
A Mourning Dove was feeding in a backyard in the 100 block of Meridian Way in Parksville.

Ten Yellow-rumped Warblers, including a female with nesting material, were seen high-up in the big leaf maple trees at the corner straight down from Shelly Road at the Englishman River Estuary in Parksville.

A Townsend's Solitaire was seen in tall conifer trees on the left side of the trail, about halfway between Mills Road and the Viewing tower at the Englishman River Estuary in Parksville.

American Goldfinch were seen along Uplands Drive near Emerald Drive in Nanaimo.

Thirty Evening Grosbeaks were seen in Erminskin Park in Parksville.

House Wrens, an American Kestrel and Purple Martins were seen in the Rivers Edge subdivision along Kaye Road in Parksville.

A Swainson's Thrush and two Golden-crowned Sparrows were seen in 5300 block of Hammond Bay Road.

Purple Martins were seen at the Nanoose Bay Flats on the nest boxes on the pilings across from the Rest Area off highway 19.

Sunday April 26:
A Yellow Warbler was seen at Somenos Marsh. An Osprey was feeding on a fish at the Golf Driving Range near the marsh.

An Osprey was spotted on the Osprey nest platform at Buttertubs in Nanaimo.

Twenty Purple Martins were seen at the Marina at Deep Bay.