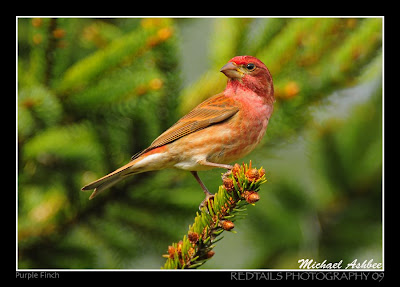 
The Tuesday bird walk went to Springwood Park in Parksville. The morning started out with rain and actually turned quite nice about half way through the morning. The highlights included
the sighting of a Black-throated Gray Warbler. We had followed the singing of it for about an hour until we were rewarded with the sight of it quite low in the bushes for us to have some great looks. A Purple Finch put on a spectacular courting display for us as he tried to impress a female Purple Finch at the top of a snag. His wings quickly fluttering and the feathers on his head were all puffed out. Obviously he was impressive to her--at the end of the display they went beak to beak, hovering above the snag! He certainly impressed us, as well, with his display.
Six birders saw and heard the following twenty-eight species of birds:
Canada Goose
Trumpeter Swan
Mallard
California Quail
Turkey Vulture
Bald Eagle
Rufous Hummingbird
Northern Flicker
Hutton's Vireo
Northwestern Crow
Common Raven
Chestnut-backed Chickadee
Red-breasted Nuthatch
Brown Creeper
Bewick's Wren
Winter Wren
Golden-crowned Kinglet
American Robin
European Starling
Orange-crowned Warbler
Black-throated Gray Warbler
Spotted Towhee
Song Sparrow
White-crowned Sparrow
Purple Finch
Red Crossbill
Pine Siskin
American Goldfinch