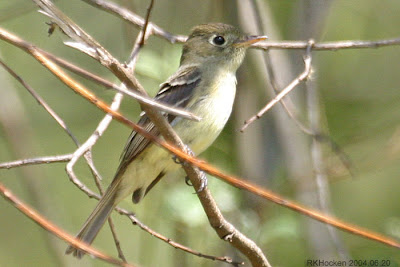 The Tuesday bird walk went to the Beaver Ponds at Nanoose Bay. The morning was sunny but quite cool. Eighteen birders saw and heard thirty-six species of birds.
Among the highlight was the sighting of a Red-tailed Hawk soaring with Bald Eagles and Turkey Vultures high up in the sky. A Black-throated Gray Warbler was low in the bushes giving us all great looks as he gleaned insects and sang for a long time. A Townsend's Warbler put in a quick appearance after the Black-throated Gray Warbler left our view. We spotted a Pacific-slope Flycatcher on a perch high up in a snag. We watched as he flew back and forth, flycatching.