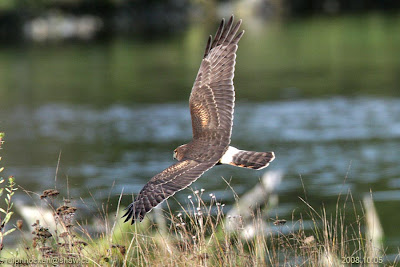 Sunday October 25, 2009:
The Sunday Bird Walk went to the Nanaimo River Estuary in south Nanaimo. The morning was cloudy but the winds were calm. It did start to rain at the end of the morning. The highlights included seeing a Northern Shrike pursuing a Northern Flicker. There were at least two Northern Shrikes perched on a snag, giving us good views. We were fascinated as we observed Shrike chasing prey unsuccessfully three times. We watched a Juvenile Northern Harrier hunting as it flew low over the estuary. A Common Raven gave chase to the Harrier and the Harrier went right back after the Raven until the Raven flew away. The Northern Harrier perched for a long time giving us great views. We could see his mostly rufous coloured body with black wings and disc like face of a owl. There were at least ten Western Meadowlarks perched on trees and flying overhead all through the morning.
Fourteen birders heard and saw the following thirty-two species of birds:
Canada Goose, Trumpeter Swan, Great Blue Heron, Mallard, Northern Pintail, American Wigeon, Barrow's Goldeneye, Common Merganser, Bald Eagle,Sharp-shinned Hawk, Northern Harrier, Northern Shrike, California Gull, Thayer's Gull, Glaucous-winged Gull, Belted Kingfisher, Northern Flicker, Steller's Jay, Northwestern Crow, Common Raven, Western Meadowlark, Red-winged Blackbird, Eurasian Starling, American Robin, Spotted Towhee, Song Sparrow, Golden-crowned Sparrow, Ruby-crowned Kinglet, Bewick's Wren, Purple Finch, House Finch and Red Crossbills.

A Varied Thrush was seen visiting feeders along Boundary Crescent in Nanaimo.

Saturday October 24:
One hundred and forty Pacific Loons were seen off shore off Yellowpoint Road in Cedar.

Friday October 23:A Short-eared Owl was seen near the Point at Neck Point Park in Nanaimo.

A Peregrine Falcon, an American Kestrel and a Bald Eagle were seen at the Shelly Road side of the Englishman River Estuary in Parksville.

Male and female King Parrots and a family of Grey Butcherbirds have been visiting backyard feeders for the past week, along Edith Street North Haven in New South Wales, Australia.