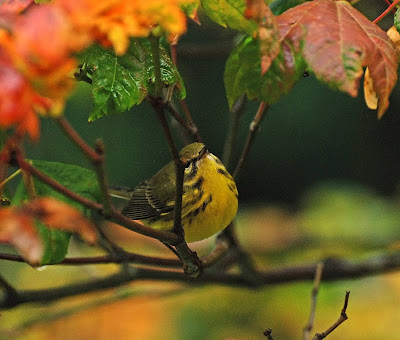 Thursday October 01:
"Rare bird alert"--Prairie Warbler" A Prairie Warbler has been seen in a backyard in Tofino since September 28 and was seen again today. The Prairie Warbler is usually found in the eastern and southeastern United States and winters in the West Indies.

A Western Grebe was spotted off shore from Shorewood Drive in Parksville.

A Yellow-rumped Warbler was seen near Dolphin Lake off Rockhamption Road in Nanoose Bay.

A raft of Surf Scoters and a Common Loon were seen on the Strait of Georgia off Madrona Point.

Mew Gulls and two Pacific Loons were seen on the Strait of Georgia off Brickyard Community Park in Nanoose Bay.

Wednesday September 30:
An Orange-crowned Warbler was seen at Neck Point in Nanaimo.

Dark-eyed Juncos have been seen at Columbia Beach and in a backyard along Meridian Way in Parksville.

Two Long-billed Dowitchers were seen at Buttertubs Marsh in Nanaimo.

Three Lincoln's Sparrows, European Starlings and a Pileated Woodpecker were seen in a garden in the San Pareil area of Parksville.

Monday September 07:
A white Common Raven was spotted along Highway 19 between Qualicum Beach and the Horne Lake turnoff.