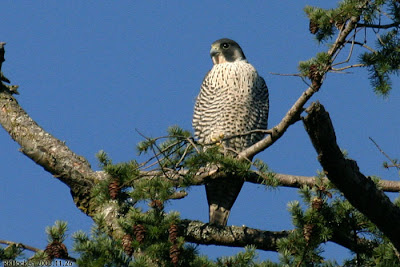 
The Tuesday Bird Walk went to the Shelly Road side of the Englishman River Estuary in Parksville. The morning was cloudy and the winds were calm however a shower finished off the morning. The highlights included seeing Varied Thrush just ahead of us on the trail and in the trees along the trail. We came across about one thousand American Robins in the forest and estuary throughout the morning. There was a Hermit Thrush in the brushes near the trail. A Northern Shrike landed on a bush not thirty feet front us giving us incredible looks. We saw a Peregrine Falcon preening itself in a tall fir tree on the west side of the forest. The Falcon left the perch twice and flew towards the Straight of Georgia only to return to the perch. When he returned for the second time he perched and looked down at us as if he was people watching. We saw a Merlin chasing a Northern Flicker. We spotted a Fox Sparrow gleaning insects from the leaves on a small bush.