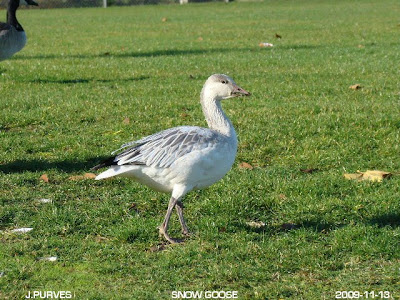 Please remember, when reporting a sighting, to leave your name and phone number, along with the date and location of your sighting.

A first fall female Common Yellowthroat was seen in a backyard in Columbia Beach.

Saturday November 14:
Three Trumpeter Swans were seen flying over a field off highway 19, between Nanoose Bay and Parksville.

One Brant Goose was seen at the Parksville Beach Community Park in with a flock of American Wigeon.

One Snow Goose was seen in with a flock of Canada Geese at Winchelsea School Grounds along Renz Road in Parksville.

An American Dipper was seen in a stream that runs into Witchcraft Lake in Nanaimo.

A Chukar was seen alongside Church Road by the three-way stop in Parksville.

Four Steller's Jays and Anna's Hummingbirds are visiting feeders in the 4600 block of Lost Lake Road in Nanaimo.

An Anna's Hummingbird is visiting feeders along Valewood Drive in Deerwood Estates in north Nanaimo.

Friday November 13:
One Snow Goose and three Cackling Geese were seen in with a large flock of Canada Geese in the Winchelsea School grounds along Renz Road in Parksville.

A Sharp-shinned Hawk was seen scouting the feeders in a backyard along Meridian Way in Parksville.