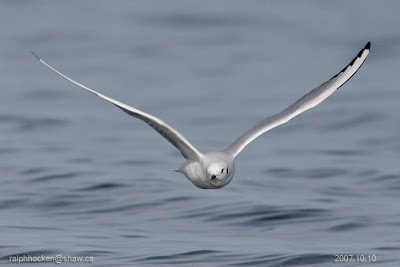 Bonaparte's Gull at Columbia Beach: Ralph Hocken Photo.
The Tuesday bird went to Columbia Beach. There were light rainshowers for most of the morning, but we were fortunate enough to have a reprieve from them for an hour. The surf was up on Strait of Georgia and the seas were choppy. The highlights of the morning included seeing several flocks of Black-bellied Plovers, a Black Oystercatcher, Black Turnstones and Dunlin heading to the gravel bar at Pebble Beach. Five flocks of over four hundred Bonaparte's Gulls flew past us and a flock of about a hundred stopping at the gravel bar. We saw two Ancient Murrelets racing just above the water down the Strait. Bonaparte's Gulls, Mew Gulls, Ring-billed Gull, California Gulls Thayer's Gulls and Glaucous-winged Gulls gave us good views as they roosted on the gravel bar.