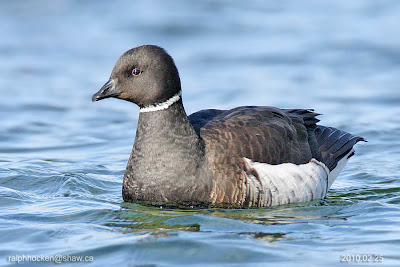 The Tuesday Bird Walk went to the Little Qualicum River Estuary in Qualicum Beach.
The water was turquoise blue with the Herring spawn. A huge raft of thousands upon thousands of seabirds, including Brant Geese, Greater Scaup, Harlequin Duck, Surf Scoter, White-winged Scoter, Black Scoter, Long-tailed Duck, Bufflehead, Common Goldeneye and Barrow's Goldeneye were offshore at the viewing platform in Qualicum Beach. Black-bellied Plovers, Black Oystercatchers, Black Turnstones and Dunlin along with Mew Gulls, California Gulls, one lone Herring Gull, Thayer's Gulls and Glaucous-winged Gulls were roosting along the shoreline. A pair of Bald Eagles appeared overhead and all the seabirds, shorebirds and gulls lifted in a spectacular display.
We saw an Eurasian Wigeon and a Northern Shoveler in among American Wigeon feeding along the Little Qualicum River. Twenty-one Trumpeter Swans swam lazily in the Estuary.