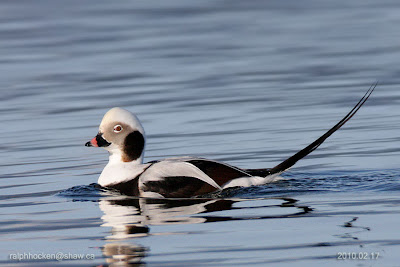 The Tuesday bird walk went to the Plummer Road side of the Englishman Estuary in Parksville. The morning was cloudy but the wind was calm. The big highlight of the morning was the sighting of a Eurasian Teal (also known as a Common Teal) in with Green-winged Teal in the San Pariel mud flats off Mariner Way. The Eurasian Teal is a Northern European duck that winters in Britain, Holland and France. It is a regular visitor to Western Alaska and is a rare, but regular visitor along the Pacific Coast.
Other highlights included seen a Merlin being chased by one fiesty Rufous Hummingbird at the start of the walk. We saw a Snow Goose and a Greater White-fronted Goose in with the Canada Geese from the viewing platform. Offshore from Mariner Way there was a mixed flock of an estimated fifty-thousand seabirds including Brant Geese, Greater Scaup, Lesser Scaup, Surf Scoters, White-winged Scoters, Black Scoters, Long-tailed Ducks, Bufflehead, Common Goldeneye, Barrow's Goldeneye, Common Mergansers, Re-breasted Mergansers, Pacific Loon, Common Loon and Pelagic Cormorants.