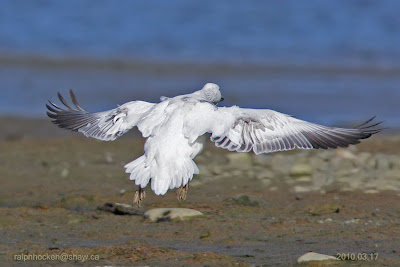 Birdwatching contacts and information find a local birder to go birdwatching
with:
http://www.birdingpal.org/

Thursday April 01:
A Mountain Bluebird was seen again today on a small tree near the middle of
the Nanaimo River Estuary by the row of old fence posts that run toward the
sawmill at Duke Point.

Wednesday March 31:
A Mountain Bluebird was seen today at the Nanaimo River Estuary, in south
Nanaimo.

Tuesday March 30:
A female Rufous Hummingbird was spotted a feeders in the 4100 block of
Gulfview Drive in Nanaimo.

Fifteen Black Turnstones were seen at Neck Point in Nanaimo.