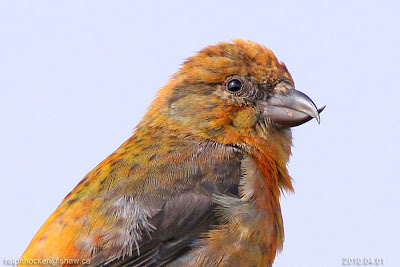 Saturday April 17:
Six Purple Martin, one Cliff Swallow, one Northern Harrier and one Northern Shrike were seen at the Nanaimo River Estuary in south Nanaimo.

A Cinnamon Teal was spotted at Quennel lake in Cedar.

Friday April 16:
A Townsend's Solitaire was seen at Neck Point Park in Nanaimo.

One male Orange-crowned Warbler was spotted eating insects from a small shrub in the 2500 block of Glenayr Drive in Nanaimo.

Two Mountain Bluebirds were seen near the new walkway at Neck Point Park in Nanaimo.

Tuesday April 13:
A Vesper Sparrow was seen at the south end of the Nanaimo Airport near the gravel road and the truck parking area.

The Tuesday bird walk went to Rathtrevor Provincial Park in Parksville.
The morning was mostly cloudy with a strong wind off the Strait of Georgia.
The tide was low and Brant Geese lined most of the shoreline in single file. A Pigeon Guillemot, a Marbled Murrelet and two Cassin's Auklet flew low over the water heading up the straight of Georgia. Many flocks of about forty Bonaparte's Gulls in each flock flew up the Strait. Rafts of Surf Scoters, White-winged Scoters, Black Scoters, Long-tailed Ducks, Greater Scaup, a Red-throated Loon, a Common Loon, Barrow's and Common Goldeneye were just offshore. Further offshore was a large raft of Pacific Loons with three Western Grebes in front of it. We heard a Common Yellowthroat and saw and heard a Orange-crowned Warbler singing from the top of a Alder Bush near the marsh. Near the end of the walk we heard and saw a Ruby-crowned Kinglet sing his deep and very rich courtship song.

Monday April 12:
Two Red-breasted Nuthatch are nesting in a snag right off a sundeck along Szasz in Nanaimo.