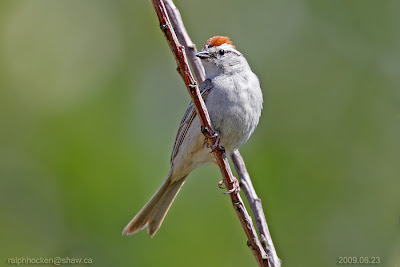 With the support of the community, The Nature Trust of BC has created a

nature kiosk in memory of Dr. John Brighton. This kiosk is designed to

favorite places on earth, a treasured property of The Nature Trust of BC

on the Englishman River Estuary.

Saturday April 24:
Two Townsend's Solitaires were seen eating holly berries for the last three days, in a yard along the 5200 block of Gainsburg Road in Deep Bay.

Friday April 23:
The Common Teal is still on the mudflats along with two Western Sandpipers along the Englishman River Estuary, Plummer Road side in Parksville.


Wednesday April 21:
Two Barred Owls were seen in the forest behind the area where a lot was being logged near the corner of Turner Road and Martindale Road close to the Englishman River in Parksville. There were two Yellow-rumped Warblers, a Ruby-crowned Kinglet, several American Robins and a Spotted Towhee on the brush piles on the lot and a Varied Thrush was heard calling from the underbrush.

An Evening Grosbeak, White-crowned and Golden-crowned Sparrows were seen in a yard in the 5200 block of Gainsburg Road in Deep Bay.


Tuesday April 20:
An Osprey was spotted over Highway 19.

A Mourning Dove, a Hermit Thrush , a Myrtle Yellow-rumped Warbler and a Common Yellowthroat were seen at French Creek.

Monday April 19:
A Wilson's Snipe, a Ring-necked Pheasant and a Great Horned Owl were seen along the Cottonwoods Golf Course in south Nanaimo.

Saturday April 17:
A Downy Woodpecker was seen excavating a cavity along Lancashire Avenue in Nanaimo.