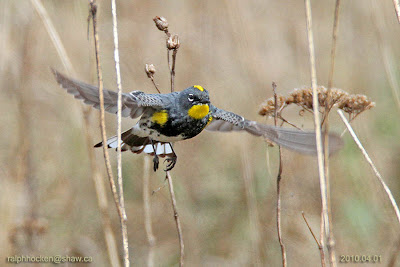 
The Tuesday bird walk went to Springwood Park in Parksville. The morning was cloudy but pleasant, with calm winds. The highlights included hearing as well as seeing an Orange-crowned Warbler and a Yellow-rumped Warbler in the same area of the park. A Cooper's Hawk gave us good looks as it glided in a large circle above us. There were several Bald Eagles perched in the tall snags and Turkey Vultures and Bald Eagles circled in the sky above us . We saw a Pileated Woodpecker feeding on bugs in a tall snag. Through out the morning we saw several Brown Creepers moving up the fir trees along the trails.