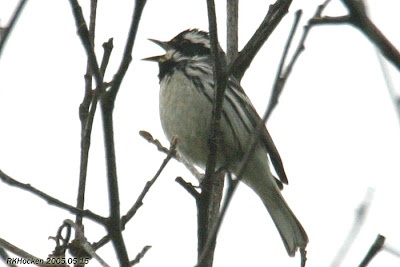 The Tuesday bird walk went to the Top Bridge Trail in Parksville. The morning was overcast, the winds were calm and dispute a couple of light showers it was a pleasant morning of birding.
We saw and heard our first Chipping Sparrow of the season feeding down on the ground with two American Robins. There was a mixed flock of Yellow-rumped Warblers, Black-throated Gray Warblers and Townsend's Warblers singing and feeding on the insects high up in some tall Big Leaf Maple Trees. We saw and heard Orange-crowned Warblers and Rufous Hummingbirds throughout the morning. A Turkey Vulture was perched at the top of a tall snag.