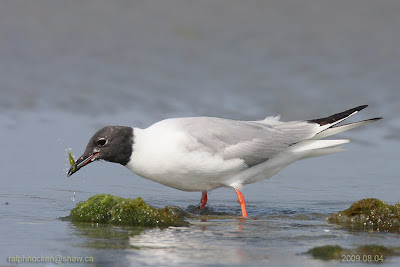 Sunday March 27, 2011:
The Sunday bird walk went to the Shelly Road side of the Englishman River Estuary in Parksville. The morning was cloudy with strong winds. The highlight of the morning was the sighting of massive numbers of the following Gulls--Bonaparte's Gulls, Mew Gulls, California Gulls, Thayer's Gulls, Herring Gulls and Glaucous-winged Gulls. An Anna’s Hummingbird was perched on top of a shrub giving us great looks.

Saturday March 26:
One female Pine Grosbeak was seen perched on top of a fir tree near Morrell Circle in Nanaimo.

Over one hundred Trumpeter Swans were spotted flying over the Morningstar ponds in Parksville.

An Osprey was seen on a high tree branch down the public access trail off Stevenson Point Road in Nanaimo.

A Rufous Hummingbird was seen at a feeder in the 100 block of Gulfview Drive in Nanaimo.

Thursday March 24:
Turkey Vultures were seen over the Ugly Dwarf Meadows near the ESSO Station at Nanoose Bay.

A pair of American Goldfinch were visiting feeders along Gerald Street in Nanoose Bay,

Tuesday March 22:
The Tuesday bird walk went to Parksville Bay and Rathtrevor Provincial Park in Parksville. The morning was cloudy with sunny periods and the wind was calm for most of the morning. Ten Trumpeter Swan's flew over heading up island. Hundreds of Brant Geese flew in and landed near the tide line. Thousands upon thousands of Gulls were along the shoreline for most of the morning. We were able to closely observe Bonaparte's Gulls, Mew Gulls, California Gulls, Thayer's Gulls, Glaucous-winged Gulls, two Herring Gulls, a Western Gull, and a Glaucous Gull. We saw thousands of Eurasian Wigeon, American Wigeon, Northern Pintail, Greater Scaup, Harlequin Duck, Surf Scoter, White-winged Scoter, Black Scoter, Long-tailed Duck , Bufflehead, Common Goldeneye and Barrow's Goldeneye in a hugh moving raft off Parksville Bay.

A Red-tailed Hawk was seen soaring over the Chase River overpass on Highway 19 in Nanaimo.

Two Bewick’s Wrens, one Varied Thrush and a flock of Pine Siskins were visiting a backyard feeder in the 2700 block of Neyland Road in Nanaimo.

Monday March 21:
Over fifteen Yellow-rumped Warblers were seen at Buttertubs Marsh in Nanaimo.

The resident Short-eared Owl, three Northern Harriers, a small flock of Tree Swallows, a Western Meadowlark and a Lincoln's Sparrow were seen at the Nanaimo River Estuary in south Nanaimo.

A very large mixed flock of Tree Swallows, Violet-green Swallows were hawking insects over the back stretch of Quesnell Lake.

Sunday March 20:
Five California Quail were visiting a backyard in the 2800 block of Skrimshire Road in Shawnigan Lake.

Monday March 14:
A Saw-whet owl was spotted in yard on Benson View, near Witchcraft Lake in Nanaimo.