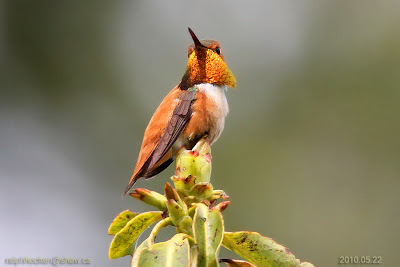 Please remember, when reporting a sighting to leave your name and phone number, along with the date, the species and location of your sighting.

Sunday March 13, 2011:
Due to the weather, the Sunday bird walk to the Nanaimo River Estuary was postponed until March 20th.

Saturday March 12:
A Rufous Hummingbird was spotted near Dover Bay and Dickinson Road in north Nanaimo.

About thousand Brant were seen lifting from the tideline and then settling down again off Johnstone Road near French Creek.

A Rufous Hummingbird was visiting feeders in the College Heights area of Nanaimo.

Thursday March 10:
Two Barred Owls were calling from a tree top at the Colliery Dam Park in Nanaimo.

Tuesday March 08:
The Tuesday bird walk went to the Little Qualicum River Estuary near Qualicum Beach. The morning was cloudy with a brisk wind and a bit of sun throughout the morning.
Gulls flew overhead all morning. We saw over four hundred Brant Geese near shore at the viewing platform in Qualicum Beach. Black Oystercatchers and Black Turnstones were also along the shoreline. Red-throated Loons, Pacific Loons, Common Loons, Horned Grebes and Red-necked Grebes were further offshore. A Sharp-shinned Hawk was perched along the Little Qualicum River at the estuary on a tall snag giving us great looks. A large raft of Surf Scoters, Black Scoters, White-winged Scoters and Greater Scaup were seen near the gravel bar.

An American Kestrel was seen along the Yellowpoint Road near the Crow & Gate Pub in Cedar.

An American Pipit was spotted at Morrell Circle and Nanaimo Lane near Morrell Sanctuary in Nanaimo.

Friday March 04:
A small flock of Red Crossbills were spotted flying above the houses along the 800 block of Harewood Mines Road in Nanaimo.