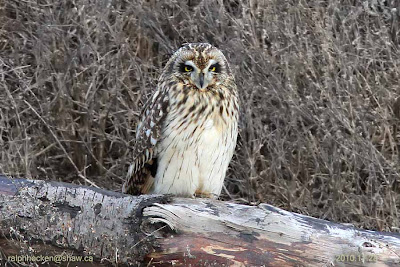 Please remember, when reporting a sighting to leave your name and phone number, along with the date, the species and location of your sighting.

A Yellow-rumped Warbler was seen in a backyard along Andover Road in Nanoose Bay.

Saturday March 19:
A Downy Woodpecker is visiting a suet feeder in a backyard in the 5900 block of Tweedsmuir Crescent in Nanaimo.

A Cooper’s Hawk was seen perched in a tree above a bird feeder in a backyard along Glenayr Drive in Nanaimo.

A Great Horned Owl was seen along Linley Road in Nanaimo.

The first Rufous Hummingbird of the season is visiting a feeder along Fawcett Road in Cedar.

Tree and Violet-green Swallows, a Barn Swallow, Gadwall and a Northern Harrier were seen at the Nanaimo River Estuary in south Nanaimo.

A Rufous Hummingbird is visiting feeders along Sandpiper Place in Nanaimo.

Tuesday March 15:
The Tuesday bird walk went to Columbia Beach and Parksville Bay. A West Coast Winter Storm greeted us for the morning. The surf was up and strong winds and heavy rain were with us all morning. The big surprise of the morning was the sighting of one Bonaparte's Gull at the start of the walk. Hundreds of gulls, Harlequin Ducks, Surf Scoters, White-winged Scoters were seen further off shore heading down the Strait of Georgia. We spotted three Eurasian Collared Doves perched in a tree along Admiral Tryon Blvd. Thousands upon thousands of Greater Scaup, Lesser Scaup, Surf Scoters, White-winged Scoter,
Black Scoters, Long-tailed Ducks, Bufflehead, Common Goldeneye, Barrow's Goldeneye and Brant formed a massive moving raft offshore from the hovercraft landing pad at Parksville Beach.