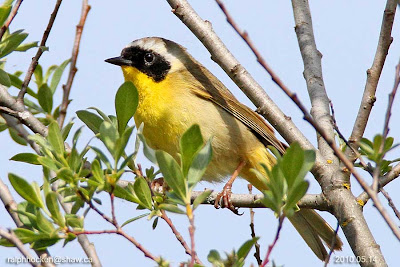 The birdstore has just received this e-mail...
Last evening I saw a finch in my nyjer seed feeder.......from a distance I
thought it was an American Goldfinch. I could see with my binoculars that it was a male Lesser Goldfinch!! I have seen one in California but never this far north. He is at my feeder again this am. He is beautiful with his black cap and olivey -green back. I have taken a few photos and hope to get a better photo when the light improves. This is at Shirley just up from Sooke. For more information call the birdstore at 250 390-3669


Thursday April 28:
A Mountain Bluebird is still being seen at Piper’s Lagoon in Nanaimo
Wednesday April 27:
An American Kestrel was seen flying into the woods behind Thrifty’s Grocery Store in Parksville.

A Chipping Sparrow was spotted along Mulholland Drive in Parksville.

A Yellow-headed Blackbird was seen at Hardy Bay Road and Devon Place in Port Hardy.

Tuesday April 26:
The Tuesday bird walk went to Springwood Park in Parksville. The morning was mostly sunny with a few clouds and calm winds. A male Anna's Hummingbird perched next to the trail giving us nice views at the beginning of the walk. We heard three Cassin's Vireos singing in the forest. We watched as four Red-breasted Nuthatches played on a tall conifer tree. Several Townsend's Warblers moved about high up in the Alder Trees. Throughout the morning we saw Orange-crowned Warblers gleaning insects and Yellow-rumped Warblers fly catching. A Red-tailed Hawk was perched on the big hydro lines for a good part of the morning. Our hearts were warmed by the sight of a female Mallard slowing crossing the road with ten Mallard Chicks following closely behind.

A Yellow-rumped Warbler was seen at the Brookwood Pond in Nanaimo.

Saturday April 23:
Two Northern Mockingbirds were seen and photographed at the top of Notch Hill in Nanoose Bay.

A Lincoln’s Sparrow was seen on the bushes near the Morningstar Ponds in Parksville.

Pelagic Trip out of Bamfield
After 5 years in Bamfield we moved out to Newfoundland, but we still love getting your email updates!
Anyway, we are coming home for May, and hoping to keep our tradition of a mid-May pelagic trip out of Barkley Sound going. Last year we had a bit more local interest that usual and we had a great day in a charter fishing boat we rented from our friend and took out to Swiftsure Bank, La Perouse Bank and beyond.

Highlights included drifting among a group of over a hundred of humpbacks with thousands of Sooty Shearwaters streaming by, tens of thousands of migrating phalaropes, Sooty, Short-tailed and Pink-footed shearwater, Tufted Puffin, Cassin's and Rhinoceros Auklet. etc....Other years we have seen Buller's and Flesh-footed Shearwater, Arctic Tern, Northern Fulmar, flocks of Sabine's Gulls, Ancient Murrelet, Brown Pelican and other great birds.

Obviously the more people, the cheaper the individual cost, and ultimately, the larger the boat that can be chartered, and the further it is possible to go!
I was wondering if you would be willing to post an 'ad' to let interested birders know that they could get in touch with me if they would like to participate in something like that. Basically a FULL day on the water in a smaller boat that would travel out to the La Perouse Bank, Barkely Canyon area or somthing similar. Target species would be albatrosses and other deep water seabirds. Last year the cost worked out to around $140 per person all in, and hopefully that might even come down with more people, on the other hand, if there is interest in chartering a larger faster boat, the cost could be slightly higher. The cost of the trip is strictly to cover charter and fuel, I am not making any profit on this at all - I just want to see good birds with good people!

The trip would leave from Bamfield in the morning on a day with good weather and calm seas sometime between May 13-16 or so.
People can email me at: mark.maftei@gmail.com for details or more info.

If you can spread the word, it would be much appreciated!
Let me know what you think.
-Mark Maftei