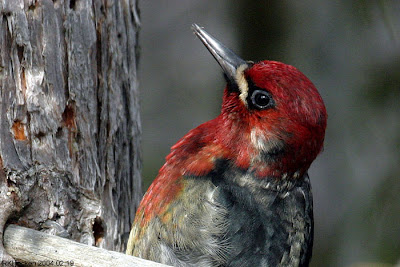 The Tuesday bird walk went to Springwood Park in Parksville. The morning was mostly sunny and warm. We had three sightings of Red-breasted Sapsuckers. The first sighting was of a Sapsucker gleaning insects on a short tree near the trail. He then flew right above our heads, giving us a great look. The Willow Flycatcher gave us close views as it hawked insects and then returned to it's perch several times. We heard a Cassin's Vireo and Warblers singing throughout the morning. We spotted a Black-throated Gray Warbler gleaning insects near the top of a Big Leaf Maple Tree.