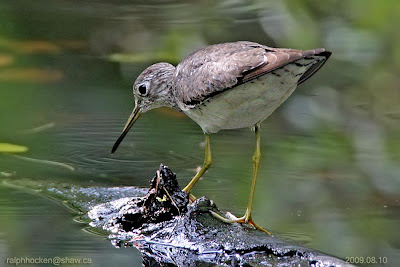 Saturday May 14:
Approximately 200 Vaux’s Swifts flew down a chimney and into a home in the 900 block of Bruce Avenue in Central Nanaimo. The residents of the house had a real challenge getting the Swifts out of the house.
A Black-headed Grosbeak was seen at the Living Forest Campground, off Maki Road in south Nanaimo.
A Ring-necked Pheasant was spotted flying across Northwest Bay Road onto the farm yard in Nanoose Bay.
A Wilson’s Warbler was seen in a backyard in the Departure Bay Area of Nanaimo.

A male Western Tanager was seen in a garden in the 300 block of 4th Avenue in Ladysmith.

Friday May 13:
Two Caspian Terns were seen at Jack Point in the Nanaimo River Estuary in south Nanaimo.
A Wilson’s Warbler was seen gleaning insects from cherry trees in the 2000 block of Marlborough Drive in Nanaimo.

Thursday May 12:
A Hammond’s Flycatcher was seen in the 2000 block of Marlborough Drive in Nanaimo.
A male Cinnamon Teal and three pairs of Wood Ducks were seen at Brookwood Marsh in North Nanaimo.

A Barred Owl was spotted at Buttertubs Marsh in Nanaimo.
A White-throated Sparrow was seen near North Road and Ross Way on Gabriola Island.

Wednesday May 11:
A Ruffed Grouse was seen in a yard on the north side of Taylor Walk at the Little Qualicum River Village.

Male and female Brown-headed Cowbirds were seen at a feeder along Homestead Way in Ladysmith.

A Mourning Dove that has been hanging out in the area of Cosgrove Crescent and Argyle Avenue in Nanaimo.