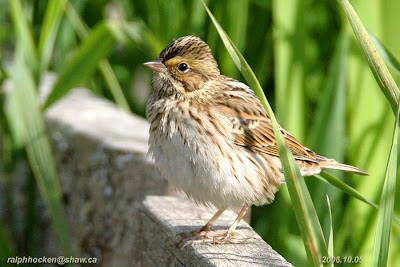 I had the good fortune to go birding with three birders from Maine on Monday. We went to the mud flats along the Englishman River Estuary in San Pariel, where we saw two Semipalmated Plover and several species of ducks. We then went to the Strait of Georgia off Marine Drive and found Horned Grebes, Red-necked Grebes, a Double-crested Cormorant, California Gulls, Glaucous-winged Gulls, a Pigeon Guillemot and a Marbled Murrelet. The forest area off Mills Road near the Englishman River Estuary produced Northern Flickers, Northwestern Crows, Common Ravens, Chestnut-backed Chickadees, American Robins, Spotted Towhee and close views of a perched Savannah Sparrow, House Finch and American Goldfinch.