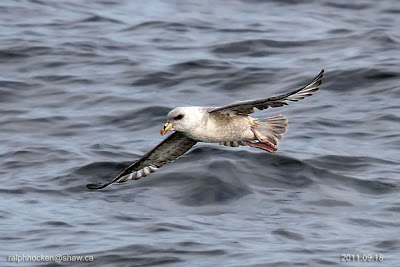 On Sunday, 96 birders and biologists board the M.V. Frances Barkley and we left
the Government Warf at 7 am. We made a quick stop at one of the fish processing
plants to take on 1600 pounds of Hake for attracting seabirds. The water in
Ucluelet harbour was calm, there was no rain and just a light breeze. We motored
out of the harbour and meet the open ocean, and then all hell broke loose. Three
meter swells were coming in from multiple directions; we were going to see
pelagic seabirds, but first the Pacific was going to test our resolve for the
first hour of the trip. Once we got past the ground swell the water started to
flatten out considerably and around 25 km from shore the sailing was quite
comfortable. The trip would definitely been cancelled if not for the size and
seaworthiness of the Frances Barkley and her crew.

Mike Boyd and I took turns throwing Hake bits to the gulls as soon as we left
the dock and we were escorted out to the 37 km mark by a cloud of hunger
California Gulls. Once we were past 30 km from shore, we started to pour small
amounts of shark oil that had been given to me from Tom Plath. This oil really
brought in the Northern Fulmars, Shearwaters and Black-footed Albatross. I had
also prepared blocks of frozen shrimp and sardines that were thrown overboard
and slowly released small bits of food. All of the chumming really paid off and
we were able to draw in large numbers of pelagic birds often with in meters of
the ship.

Michelle Force, Russell Cannings and others manned the handheld radios and
worked hard to share what was being seen on each of the decks. We had allot of
very good birders on the ship and they were all really great about spotting
birds and letting everyone on board know where the birds were. I would like to
thank everyone for contributing to the success of the trip. I would also like to
thank Neil Robins for helping to spread the word about the trip via the Nanaimo
bird alert.

I had great time and I finally saw a Skua! For many people this was their first
pelagic trip and it was wonderful to hear so many people saying that they had
gotten 9, 10 or 11 lifers that day. There were many smiling birders on the ship.

WildResearch is considering doing another pelagic, and I will keep the
BCBirdingVanIsland group informed.

There are likely other sightings that were made that I am unaware, but here is
the list.

Tufted Puffin- 1. Flew right over the ship- a real crowd pleaser.
Pigeon Guillemot- common near shore.
Cassin's Auklet- 2.
Buller's Shearwater- 6. These birds came in at 32 km, checked out the ship and
then left.
Sooty Shearwater- 100's. First birds were seen within 1 km of shore and became
come by 5 kms from shore.
Pink-footed Shearwater- 100's, first ones were seen at 15 km and this species
was near the ship for the rest of the day.
Short-tailed Shearwater- 4. Possibly more around, but at least 4 were positively
identified.
Black-footed Albatross- 8- 10 landed within 70m of the ship with another 12- 20
fly bys within 200m of the ship; most were seen at 30- 37 km from shore.
Northern Fulmar- 100s, we started seeing them close to shore and their numbers
kept building as we travelled off shore. We saw all of the colour morphs, and
had a least fifty at all times on the water next to the ship for 3 hours at the
37 km mark.
Fork-tailed Storm-Petrel-10-12. First seen at 37 km.
Leach's Storm-Petrel- 1.
Red-necked Phalarope- 10- 12. Seen close to the ship.
Red Phalarope- 2. Seen on the way back.
South Polar Skua- 10- 13, a surprisingly large number of this species from the
20 km to 37 km.
Pomarine Jaeger- 18, a handful came in close to the ship.
Long-tailed Jaeger- 1, fly by.
Parasitic Jaeger- 5. Surprisingly few Parasitic.
California Gull- 1,000s,
Glaucous-winged Gull- numerous inshore, relatively scarce offshore.
Thayer's Gull- 5.
Herring Gull- 5-10.
Sabine's Gull- 30 pasted in front of the ship between 27-37 km.
Black-legged Kittiwake- 1. Adult fly by.
Northern Pintail- 50, 4 different flocks flying well offshore, with the
Green-winged Teal and the Mallard.
Green-winged Teal-1.
Mallard- 1.

Marine Mammals:
Stellar's Sealion- 4, in Ucluelet harbour
Humpback Whale- 6-8, at about 30 km, we watch them for 20 min on the way out and
saw them again on the way in to port.

And... one Sunfish.
And not a single Heermann's Gull or any passerines offshore.