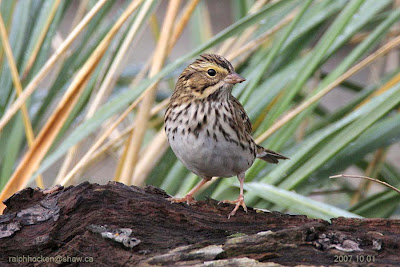 The Tuesday bird walk went to the Shelly Road side of the Englishman River Estuary in Parksville. The morning was sunny and warm with a strong breeze off the Strait of Georgia. We spotted a Black-throated Gray Warbler in with a flock of Chestnut-backed Chickadees in the trees near the trail. There was a large number of Lincoln's Sparrows, Savannah Sparrows and Cedar Waxwings along the edge of the meadows. Two young Western Tanagers gave us good looks from the low bushes along the trail. Ten Evening Grosbeaks flew over us at end of the walk.