The Tuesday bird walk went to the Plummer Road side of the Englishman River Estuary in Parksville. The morning was sunny and warm with calm winds and the ocean was as smooth as glass. A singing Chipping Sparrow greeted us at the start of the walk. We saw several male Rufous Hummingbird perched and then doing their courtship dives during the walk. We heard a Warbling Vireo singing near the river and then we had great views of him as he put in an appearance. Several Orange-crowned Warblers were spotted feeding near the trail. We caught a glimpse of a singing Yellow Warbler near the trail.  Over two hundred Brant were on the Strait of Georgia and fifty more flew in and landed near shore. Ten Pacific Loon, two Marbled Murrelet and one Pigeon Guillemot were on the Strait. Five Western Sandpipers, three Least Sandpipers, two Semipalmated Plovers, two Braid’s Sandpipers and one Greater Yellowlegs were feeding on the mud flats as the tide started to come in. 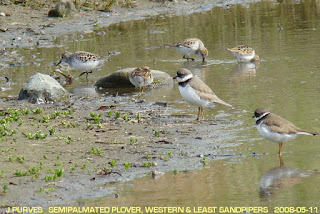 
The Tuesday bird walk on May 14 will be going to Lot Ten in Qualicum Beach. 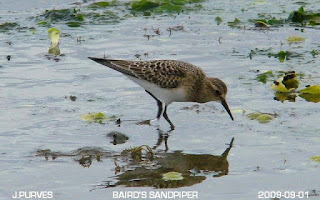