The Tuesday bird walk went to Lot Ten in Qualicum Beach.  The morning was clear and sunny with calm winds. A Black-headed Grosbeak was singing loudly when we arrived at Lot Ten.  We spotted the Grosbeak high in a tree and shortly after another Grosbeak started singing to give us a very musical start to the morning.  American Robins were everywhere this morning. We heard Pacific-sloped Flycatchers, Orange-crowned Warblers, Black-throated Gray Warblers, Wilson's Warblers and Townsend’s Warblers singing all morning. We watched a Belted Kingfisher chase an Varied Thrush up the river flying just above the water. A Pacific-slope Flycatcher and Vaux’s Swifts gave us quick looks as they flew over.  We spotted a Pine Marten looking down at us from a small tree to add a little more nature to our walks! 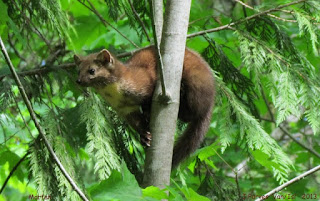 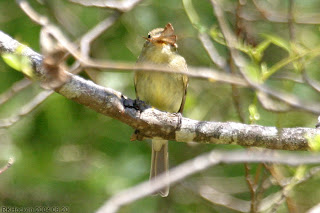 Pacific-slope Flycatcher: Ralph Hocken Photo.
The Tuesday bird walk on Tuesday May 21 will be going to Shelly Road side of the Englishman River Estuary in Parksville.
Good birding
Neil Robins
Parksville
Pine Marten
The pine marten is a carnivorous member of the weasel family. The marten's coat is characterized by soft, dense fur which varies in color from tan to dark brown and mostly black on the feet and legs. Lighter colored martens tend to have grayish brown tails, while darker animals have dark brown to almost black tail fur. The fur around the muzzle varies from gray to light brown with a short dark line running up the forehead from the corner of each eye. The marten's throat and upper chest are a tan color.
The ears give the pine martens a cat like look.. Martens vary in body length from 48 to 65 cm, not including the tail which can be a third of the overall body length. They may weigh up to nearly 2 kilos. Males are larger than females. Martens have sharp claws which they use for climbing as well as for holding their prey.
Martens depend on voles and mice, which are their primary food source over much of Southern Vancouver Island  The second important food source is berries, especially blueberries, followed by small birds, eggs, and vegetation. Marten will also eat squirrels and if food is scarce enough will occasionally exhibit cannibalism.
The Marten is a an opportunistic feeder. Carrion such as the remains of wolf kills, dead spawning salmon remains or winter killed deer and elk are all eaten.  Although martens are suited for nocturnal foraging, they are also active during mornings and evenings, especially during the long days of summer.
The Pine Martens of Vancouver Island are rare to see and they only inhabit the south Island.
http://www.askbud.ca/pine_marten,_vancouver_island_-_askbud_ca.htm