The morning started out with light rain and got heavy enough to keep the optics wet and fogged.  Fortunately it cleared somewhat before the walk ended.


Even with the damp weather we were rewarded with some great sightings of migrating birds.  One of the highlights were several Lincoln Sparrows seen throughout the walk.


A Merlin perched long enough for some great views and 3 Bonaparte's Gull were seen flying over the ocean side.  We were also treated to two Western Tanager's feeding in the bushes.


8 wet but cheerful birders saw and heard the following 42 species: 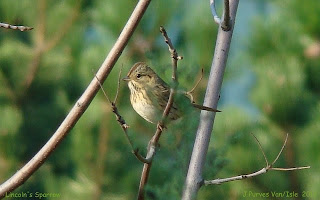 Tuesday bird walk--September 10-The Little Qualicum River Estuary in Qualicum Beach –  meet at the Viewing Platform near Garrett Road and Highway 19a at about 9:20 a.m. ( if the viewing platform is closed go to the parking area near the “A” Frame house at the Estuary.