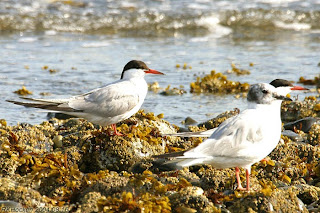 
The Tuesday bird walk on September 17 will be going to Columbia Beach. Meet at Parksville Community Park at the Lions Playground parking lot at 9:00 am or at the parking area off Admiral Tryon Blvd. at about 9:15 am.

Once again, thank-you John, Rhonda and Paul for leading the Tuesday Bird Walk.  It’s so nice to be back!  Neil