The Sunday bird walk went to the Shelly Road side of the Englishman River Estuary in Parksville.. The morning was partly clear and calm wind seas.  We spotted a Peregrine Falcon perched in its usual perch for most of the morning. A large flock of Canada Geese with two Snow Geese flew over us and landed near the mud flats. 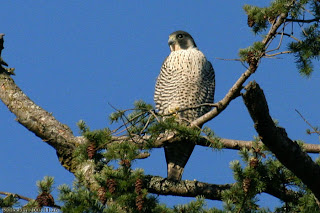 
A Canvasback duck was spotted in with a large flock of Hooded Mergansers at Buttertubs Marsh in Nanaimo.


Saturday, November 09:
A pair of Ruddy Ducks, a Greater White-fronted Goose, and seventy Trumpeter Swans were seen at Quennel Lake in Cedar.


Wednesday, November 13:
A Northern Waterthrush was seen at edge of the pond near the parking lot at Neck Point Park in Nanaimo.


Tuesday, November 12:
The Tuesday bird walk went to Rathtrevor Provincial Park in Parksville. The morning was windy and cloudy with sunny periods and a light shower during the morning. A large flock of Dunlin and Black-bellied Plovers were feeding along the tide line when we arrived at low tide. We saw many Pacific Loons, Common Loons, Horned Grebes and Red-necked Grebes on the choppy Strait of Georgia. Several flocks of American Wigeon, Mallard and Common Goldeneye flew down the Strait. We had great close views of several Golden-crowned Kinglets and Ruby-crowned Kinglets on the walk through the forest. 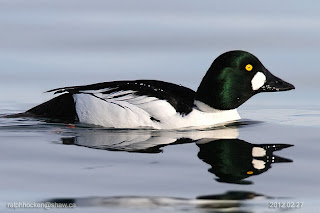 
A Brown Booby was seen on a fishing boat three miles off Ucluelet on the west coast of Vancouver Island.

A Greater White-fronted Goose, a Cackling Goose, a Long-tailed Duck and three Townsend's Warblers were seen at Brannen Lake in Nanaimo.

One male and one female Redhead ducks were seen at Diver Lake in Nanaimo.


Four Townsend's Warblers were spotted at Bowen Lake in Nanaimo.

An Orange-crowned Warbler was seen along the Maki Road trails near Beck Creek in south Nanaimo.

The Tuesday bird walk on November 19 will be going to the Little Qualicum River Estuary in Qualicum Beach. Meet at the Parksville Community Park at the parking lot near the Lions Club playground at 9:00 am or at the viewing platform off highway 19a in north Qualicum Beach at about 9:20 am.

The 2013 data report for the banding project at Buttertubs West Marsh is available at the following link:
http://web.viu.ca/demerse/birds/VIU_Banding_Report_2013.pdf

Let me know if you have any questions, or would like to find out more about our results.