The Sunday bird walk went to Neck Point Park in Nanaimo. The morning was partly cloudy with mostly calm winds.  We saw and heard a large number of American Robins throughout the morning. We spotted two Yellow-rumped Warblers just off the trail. There were Black Oystercatcher, Black Turnstones, Dunlin, Black-bellied Plovers on the rocks just off the shore.


Three Canvasback ducks were seen in with a flock of Ring-necked Ducks on the Morningstar Ponds in French Creek.

An American Kestrel was spotted at the Nanaimo Airport in south Nanaimo.


The Tuesday bird walk went to the Little Qualicum River Estuary in Qualicum Beach. The surf was up and the Strait of Georgia was filled with white caps making for a wild windy morning of birding. We spotted a flock of Dunlin on the gravel bar at the viewing platform.  Further offshore there were Pacific Loons, Common Loons, Horned Grebes, Red-necked Grebes and Double-crested Cormorants riding the surf.  A Northern Shrike entertained us from a short bush near the road.  Nine Black Turnstones were huddled against the wind along the rocky shore. Trumpeter Swans flew above us, singing as they moved. Hundreds of Bonaparte's Gulls, Mew Gulls, a Ring-billed Gull, California Gulls, a Herring Gull, Thayer's Gulls and Glaucous-winged Gulls gathered and bathed in the fresh water of the Estuary. One lone Glaucous Gull perched on a gravel bar close to shore allowing us to study him. 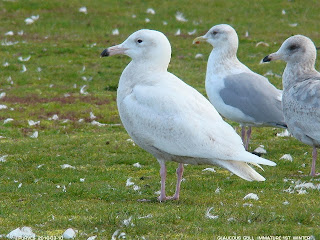 The 2013 data report for the banding project at Buttertubs West Marsh is available at the following link:
http://web.viu.ca/demerse/birds/VIU_Banding_Report_2013.pdf

Let me know if you have any questions, or would like to find out more about our results.