“EXPLORE NATURE---GO BIRDING”
To report your sightings phone the Store at 250-390-3669 or e-mail us at
thebackyard@shaw.ca
Please remember, when reporting a sighting, to leave your name and phone number along with the date, the species and location of your sighting.


The Sunday bird walk went to Morden Colliery Provincial Park south of Nanaimo.  The morning was sunny and warm—we got a reprieve in the forest where it was cooler.  The highlights included seeing a family of Pileated Woodpeckers.  Just off the bridge in a tall snag, the heads of two fledglings were poking out of a nesting cavity waiting to be fed.  We spotted a Red-breasted Sapsucker also feeding fledglings in the same snag.  We compared how each species was being fed—the Pileated fledglings were  poking their heads out of the nest cavity to be fed and the Sapsuckers were staying down in the cavity waiting to be fed.  We heard and saw a Common Yellowthroat singing on a short bush below the bridge. Pacific-slope Flycatchers, Hammond’s Flycatchers and Warbling Vireos were singing through the morning. 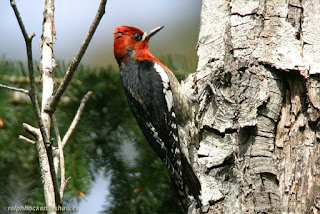 
Tuesday, June 02:
The Tuesday bird walk went to the Shelly Road side of the Englishman River Estuary in Parksville. The morning was overcast and the winds were calm. A flock of singing Red Crossbills flew into the top of a tall conifer tree at the parking area on Parksville Beach just before the start of the walk. We saw and heard a large number of Yellow Warblers singing from their perches in a tree just off the trail. The Willow Flycatchers have arrived on their migration--we saw ten of them singing from the top of short bushes along the trail.  A Savannah Sparrow was singing from his perch on the meadow. We spotted a male Ring-necked Pheasant flapping his wings and calling near the fence at the park boundary.  A Pacific-slope Flycatcher caught our eye as it sang from his perch along the trail. 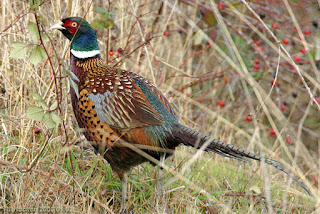 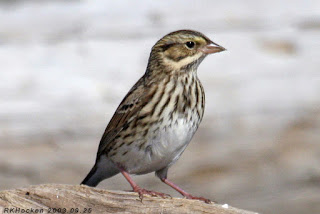 
The Tuesday bird walk on June 09, 2015 will be going to the Beaver Ponds in Nanoose Bay.  We meet at the Parksville Community Park by the Lions Club playground parking lot at 9 a.m. or the parking area past the four way stop sign along Powerpoint Road in Nanoose Bay at about 9:20 a.m.


The Sunday bird walk on June 14, 2015 will be going to Springwood Park in Parksville.  Meet at the Birdstore at 9:00 a.m. or at the west end of Despard Avenue off highway 4a in Parksville at about 9:25 a.m.