The Tuesday bird walk went to the Beaver Ponds at Nanoose Bay. The morning was sunny and warm but cool in the forest. We heard and then saw a Black-throated Gray Warbler feeding high up in the tall trees. A Cassin’s Vireo swooped down giving great views. Black-headed Grosbeaks, Warbling Vireos, Willow Flycatcher, Pacific-slope Flycatchers and Western Tanagers were singing throughout the morning.  A female Western Tanager landed in a short bush near us. We spotted a Northern Shrike high up in a tree--a very unusual sighting for this time of the year.  A female Hooded Merganser with four little chicks was swimming and diving on the Beaver Pond—an awesome sighting!  A Wilson’s Warbler was heard high up in the conifer trees. We had close views of a Western Wood-Pewee perched on a snag over the trail.  A Hammond’s Flycatcher flew into the same location giving us more close looks.  Bald Eagles and Turkey Vultures circled high over head for a good part of the morning. Three Turkey Vultures came into our view as they dropped down from the sky just above us. 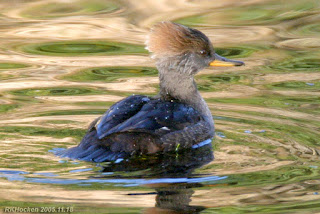 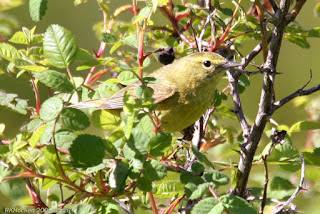 
The Tuesday bird walk on June 16, 2015 will be going to the Top Bridge Trail in Parksville. 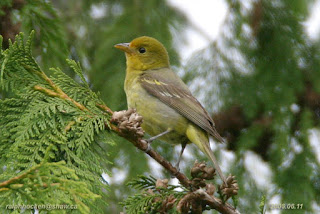