The Sunday bird walk went to Nanoose Bay. The morning was cloudy with calm winds and fog.   A Western Grebe, two Pigeon Guillemots, Surf Scoters,  White-winged Scoters and a  Black Scoter were seen resting on the water near the oyster barrels.  A Eurasian Widgeon was spotted in with the American Widgeons.  A shorebird flew in and landed near the grassy shore by the Green-winged Teal and began feeding, giving us lots of time to identify him.  We concluded that it was a Red Knot--a first sighting for the Sunday bird walks. 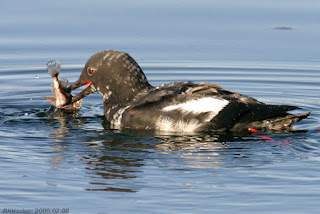 
Saturday, October 17:
A Cassin’s Finch was spotted feeding in a backyard along Meridian Way in Parksville.


Tuesday, October 13:
The Tuesday bird walk went to the Little Qualicum River Estuary in Qualicum Beach. The morning was cloudy with a breeze off the Strait of Georgia.  A flock of twelve Black Scoters, three flocks of Surf Scoters, several White-winged Scoters, numerous Red-breasted Mergansers, Pacific Loons and Common Loons were seen on the Strait.  A Red-tailed Hawk, a Sharp-shinned Hawk and a Merlin flew overhead, entertaining us during the morning.  One Killdeer, four  Black Turnstones, a Dunlin, two Pectoral Sandpipers and nine Black Oystercatchers were seen feeding close to shore.  A large flock of  Bonaparte's Gulls gathered along the gravel bars not far from shore. 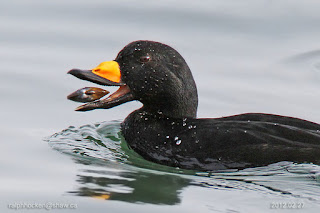 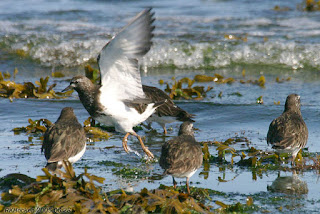