The Tuesday bird walk went to the Little Qualicum River Estuary in Qualicum Beach. The morning was cloudy with strong


(surf up) winds off the Strait of Georgia. Large numbers of Brant Geese, Long-tailed Ducks, Black-bellied Plovers, Black Turnstones and Black Oystercatchers were seen from the viewing platform in Qualicum Beach. Gadwall, Barrow’s Goldeneye, Eurasian Wigeon, large numbers of   Surf Scoters, White-winged Scoters, and Black Scoters were seen from the estuary. A Cooper’s Hawk was perched on a short snag. One Turkey Vulture and five Trumpeter Swans were seen on the way to the bird walk. 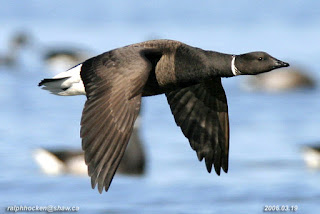 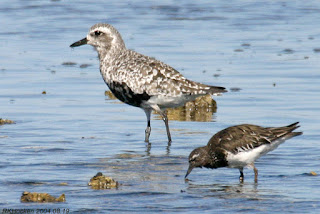 
The Tuesday bird walk on March 15, 2016 will be going to the Little Qualicum Fish Hatchery north of Qualicum Beach. Meet at the Lions Club Kids playground parking lot at 9:00 a.m. or at the Brant viewing platform in north Qualicum Beach at about 9:15 a.m.

Are house wrens or Berwick wrens nesting in this area? We're from northern Alberta and used to have House wrens there during breeding. Just thought I heard one this morning.

It is possible that you heard a House Wren as there are a few around but the Bewick's Wren are the most common of the two species around here. As for nesting both species do nest here and they are beginning to sing and establish territories.

Thanks -- I'm going to have to find both calls online to hear the difference. If I could actually see it, then I'd know. I'll watch and listen again in the morning. I've put up appropriate size nest boxes too. Thank you kindly for your response.