he Tuesday bird walk went to the Shelly Road side of the Englishman River Estuary in Parksville. The morning was partly cloudy with calm winds. We watched in fascination as a Hairy Woodpecker went into a hole in the tree near the trail and started excavating the hole for it’s nest.  Two Downy Woodpeckers were tapping trees nearby.  We had good looks at a Swainson's Hawk flying overhead---an unusual sighting for this area. For the first time this season, we heard and then saw several Orange-crowned Warblers feeding near the trail.  Yellow-rumped Warblers and Ruby-crowned Kinglets were along the trail for most of the morning.  A Band-tailed Pigeon was perched in a tree over the trail--another first of the season bird. 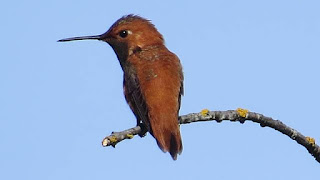 
The Tuesday bird walk on April 05, 2016 will be going to the Plummer Road side of the Englishman River in Parksville. Meet at the Parksville Community Park at the Lions Club Kids Playground parking area at 9:00 a.m. or at the corner of Plummer Road and Shorewood Drive at about 9:10 a.m.