The Sunday bird walk went to Buttertubs Marsh in Nanaimo. The morning was cloudy at the start but soon turned sunny with calm winds.  We spotted an American Coot on the marsh.  A Merlin was perched on the top of a tall snag giving us great views.  A Red-tailed Hawk flew over head and disappeared as it caught a thermal.  A large flock of Band-tailed Pigeons landed in a tall tree and then flew off.  A


Hermit Thrush was seen and heard in a bush close to the trail.


American Pipit’s were seen at Pipers Lagoon in Nanaimo.


Two Pileated Woodpeckers are visiting feeders in the 800 block of Douglas Street in Nanaimo.


A Trumpeter Swan was seen at the Deep Bay Harbour today. 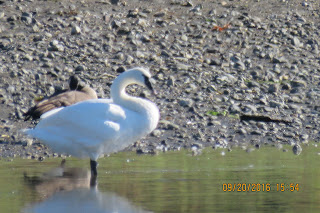 
Wednesday, September 21: A White-throated Sparrow was seen just off of Owl Place in Long Lake Heights in Nanaimo. 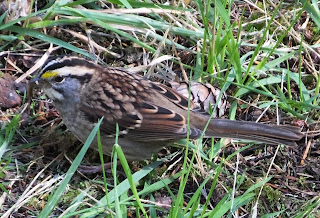 
The morning started out with rain showers, but it soon cleared and the sun shone, brightly.  The winds were calm on the Strait of Georgia.  A large flock of Cedar Waxwings and American Robins greeted us at the start of the walk. We spotted a Townsend’s Solitaire perched high up in a tall conifer tree. Two Ring-billed Gulls, several Bonaparte's Gulls, Mew Gulls, California Gulls, Glaucous-winged Gulls and one lone Thayer’s Gull were preening near the shore.  Horned Grebes, Red-necked Grebes, Western Grebes and a Pacific Loon in breeding plumage were seen further offshore.  We were entertained by a Townsend’s Warbler, a large number of Orange-crowned Warblers and several Yellow-rumped Warblers in the forest. Many flocks of American Robins were seen through out the morning. A very large flock of Canada Geese flew high overhead heading south.


Eleven Turkey Vultures were seen along the shore at Pipers Lagoon in Nanaimo.


The Sunday bird walk on October 02, 2016 will be going to Rathtrevor Beach Provincial Park in Parksville. Meet at the Birdstore at 9:00 a.m. or at the main parking lot at Rathtrevor Park at about 9:30 a.m.


The Tuesday bird walk on September 27, 2016 will be going to the Plummer Road side of the Englishman River in Parksville. Meet at the Parksville Community Park at the parking lot near the Lions Club Kids Playground at 9:00 a.m. or at the corner of Plummer Road and Shorewood Drive at about 9:10 a.m.