The Tuesday birdwalk went to the Little Qualicum River Estuary in north Qualicum Beach.  The morning was sunny with calm winds. A large number of Surf Scoters, a White-winged Scoter, a Black Scoter, Horned Grebes and Red-necked Grebes were seen from the viewing platform. The winter seabird colony are returning!  Killdeer were numerous throughout the morning.  We watched a Peregrine Falcon swoop down and lift a flock of Gulls off of the gravel bar and then catch a thermal and fly away. We spotted another Peregrine Falcon perched near the top of a tall conifer tree, giving us great views.  A Cooper’s Hawk was perched in a tall snag on the estuary. We watched as a Merlin caught a Barn Swallow high over the estuary. 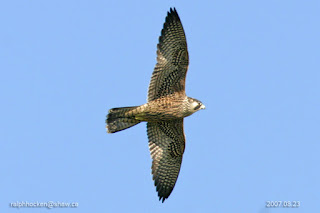 
The Tuesday birdwalk on September 20, 2016 will be going to Rathtrevor Beach Provincial Park in Parksville. Meet at the Parksville Community Park parking lot near the Lions Club Playground at 9:00 a.m. or at the main parking lot at Rathtrevor Park at about 9:10 a.m.