The first Tuesday bird walk of the season went to the Shelly Road side of the Englishman River Estuary in Parksville. The morning was mostly cloudy with calm winds. We spotted a family of Brown Creepers moving up the trunk of a tall Big Leaf Maple Tree at the start of the walk. The seabirds are beginning to arrive for the winter----Surf Scoters, Common Loons, Horned Grebes, Red-necked Grebes, Pelagic Cormorants Common Murre and a Marbled Murrelet were all seen on the Strait of Georgia.  A Barn Swallow, a Purple Martin, a Vaux’s Swift and a  Black Swift were seen overhead.  A Yellow Warbler, several Orange-crowned Warblers, a Wilson’s Warbler, a Common Yellowthroat, a Warbling Vireo, a Willow Flycatcher and a  Lincoln's Sparrow was seen near the end of a great walk. 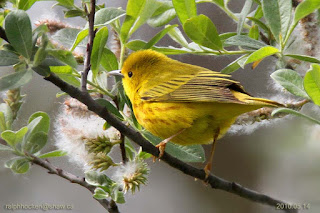 
The Tuesday bird walk on September 13, 2016 will be going to the Little Qualicum River Estuary in Qualicum Beach. Meet at the Parksville Community Park at the parking lot near the Lions Club playground at 9:00 a.m. in Parksville, or at the Brant Viewing Platform in north Qualicum Beach at about 9:20 a.m.