The Tuesday bird walk went to the Plummer Road side of the Englishman River in Parksville.  The morning was sunny with a strong wind off the Strait of Georgia. Two birders saw four Killer Whales at about 9:00 a.m. from Shorewood Drive close to the mud flats in San Pariel.  They spotted one large adult and three smaller whales about half way across the strait.   A Savannah Sparrow,  Song Sparrows, a Lincoln’s Sparrow, a White-crowned Sparrow, several  House Finch and Purple Finch were seen at the start of the walk. A Black-bellied Plover, two Least Sandpipers, two Western Sandpipers and three  Killdeer were feeding on the mud flats.  A flock of American Wigeons, Surf Scoters, Horned Grebe, one Red-necked Grebe, several  Harlequin Duck, two  Common Loons and three Pacific Loons were spotted on the strait.
. 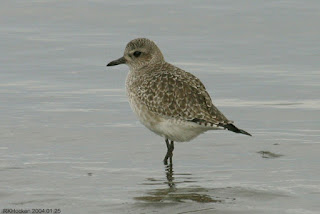 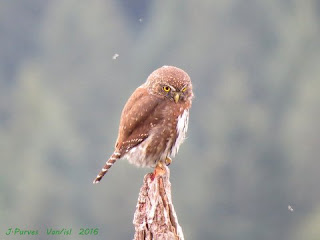 Northern Pygmy Owl: Photo by John Purves.
The Tuesday bird walk on October 04, 2016 will be going to Columbia Beach. Meet at the Parksville Community Park at the parking lot near the Lions Club Kids Playground at 9:00 a.m. or at the parking area on Admiral Tryon Bld. off Columbia Drive in French Creek at about 9:15 a.m.
Good birding
Neil Robins
Parksville
thebirdstore.blogspot.com
thebackyard@shaw.ca