The Tuesday bird walk on January 31, 2017 went to Rathtrevor Beach Provincial Park in Parksville. The morning was mostly sunny with calm winds, although the Strait of Georgia was a little rough and the tide was high. We saw sixty Brant Geese, hundreds of Dunlin, six Black Turnstones, twelve Black-bellied Plovers and one Black Oystercatcher all feeding along the tide line not far from us. We saw Wing-winged Scoters, Bufflehead, Barrow’s Goldeneye, Common Goldeneye, Long-tailed Duck, Common Mergansers, Red-breasted Mergansers, Pacific Loons and Common Loons further off shore. A Red-breasted Sapsucker flew across the road and landed in a tall conifer. A Hermit Thrush was spotted in the grass and then flew into a bushy area.  We spotted the Thrush again at the edge of a bush where it stayed for a long time giving us all excellent views. 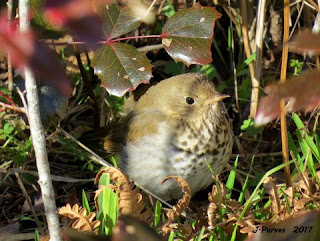 Twenty-two birders including a visiting birder from Finland saw and heard the following forty-eight species: 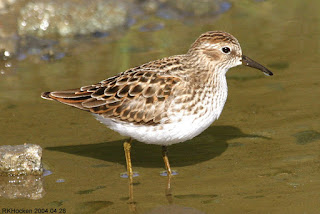 
The Tuesday bird walk on February 07, 2017 will be going to Deep Bay. Meet at the Parksville Community Park at the parking lot near the Lions Club Playground at 9:00 a.m. or at the Deep Bay Marine parking lot at about 9:30 a.m.