The Sunday bird walk went to Legacy Marsh in Upper Lantzville. The morning was clear, the winds were calm and it was hot!  Mallards, Wood Ducks and a
Great Blue Heron were seen on the marsh. Tree Swallows, Barn Swallows and Violet-green Swallows flew overhead. Warbling Vireos, a Hutton’s Vireo and Cassin’s Vireos were heard and seen just off the trail.  We had great views of several Willow Flycatchers perched and singing along the marsh. We heard and then saw a Western Tanager at the top of a conifer tree. 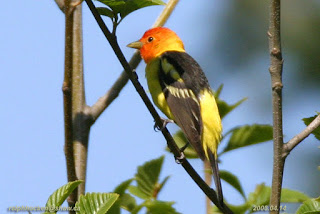 
Parksville/Qualicum Beach Tuesday bird walk, June 20, 2017
The Tuesday bird walk went to the Little Qualicum River Hatchery in Qualicum Beach. The morning was mostly  sunny with calm winds.  Canada Geese,four White-wing Scoters, a Common Loon and four Killdeer were seen at the Brant viewing platform.  An American Dipper was seen on the river searching and finding food.  We saw an adult Red-breasted Sapsucker and a fledgling Red-breasted Sapsucker on a tree just off the trail. Several Black Swifts, a Vaux’s Swift and many Violet-green Swallows flew overhead during the morning.  Yellow-rumped Warblers, Orange-crowned Warblers, Pacific-slope Flycatchers, Willow Flycatchers and Warbling Vireos were heard during the walk.  A family of Western Tanagers were spotted flying just off the trail.  A Common Yellowthroat, a Wilson's Warbler and a Yellow Warbler feeding near the trail. Two Red-tailed Hawks were flying high overhead at the end of the walk. 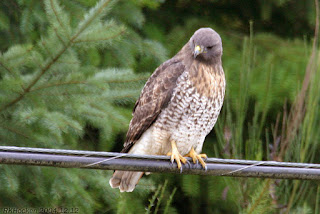 
The Tuesday bird walk on June 27,2017 will be going to Lot Ten in north Qualicum Beach. Meet at the Parksville Community Park at the parking lot next to the Lions Club Kids playground at 9:00 a.m. or at the parking area on the forest side of highway 19a on Kinkade Road at about 9:20 a.m.
This will be the last Tuesday Birdwalk until September 5, 2017.  Join us for the Sunday Bird walks in Nanaimo for the summer.


The Sunday Birdwalk on July 02/17 will be going to Neck Point Park in Nanaimo. Meet at the Birdstore at 9:00 a.m. or at the parking lot at Neck Point off Hammond Bay Road at about 9:20 A.M.
Good birding
Neil Robins