Tuesday bird walk, January 09, 2018:
The Tuesday Bird Walk went to Rathtrevor Beach Provincial Park in Parksville.
The morning was mostly sunny but there was a very strong wind off the Strait of Georgia. Two Brant and a large flock of American Widgeons greeted us at the start of the walk. Two Golden-crowned Sparrows were seen feeding on the trail not far from us. A large number of Northern Pintail flew overhead heading up the Strait.  A flock of White-winged Scoters were spotted hiding in the high waves offshore.  Common Murre heading up the Strait all morning.  California Gulls and Mew Gulls flew high overhead.  A Yellow-rumped Warbler was spotted high up in a conifer tree. Two Ruby-crowned Kinglets were feeding in low bushes just off the trail. 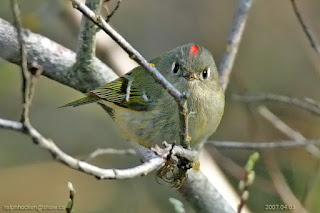