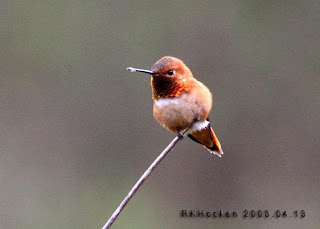 Saturday March 22:
An Orange-crowned Warbler and a flock of Bushtits were seen at Transfer Beach Park in Ladysmith.
Two Cackling Geese were seen along Doole Road in Yellow Point.
A Great-horned Owl was heard calling near Jack's Point in Cedar.
A Rufous Hummingbird was seen visiting feeders in the 7000 block of Aulds Road in Nanaimo.
Two Turkey Vultures were seen flying above Linley Valley in Nanaimo.

Wednesday March 19:
A Red-breasted Sapsucker was seen feeding on a Western Red Cedar at the top of Summit Drive on Long Lake Heights in Nanaimo.

Tuesday March 18:
A Brown Pelican was spotted at the Ladysmith Harbour flying west over the Highway in Ladysmith.
A Rufous Hummingbird was seen along Fawcett Road in Cedar.
A Western Screech Owl was heard calling at McGregor Marsh in north Nanaimo.

Monday March 17:
A Yellow-rumped Warbler was seen along Ermineskin Avenue in Parksville.
A Rufous Hummingbird was visiting feeders in the 2800 block of Shady Mile Way in Nanaimo.
An immature Glaucous Gull was spotted at Somenos Marsh in Duncan.