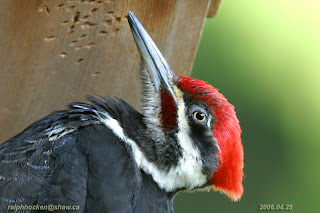 Pileated Woodpecker: Ralph Hocken Photo.
To report your sightings
please phone the Store at 390-3669
or e-mail us at thebackyard@shaw.ca
or call the Bird Alert at 390-3029

Monday March 24:
Over fifty Violet-green Swallows, a Northern Shrike, a Greater Yellowlegs and seven Western Meadowlarks were seen at the Nanaimo River Estuary in south Nanaimo.
Both Anna's and Rufous Hummingbirds are coming to feeders in the 4600 block of Lost Lake Road in Nanaimo.

Saturday March 22:
A Rufous Hummingbird has returned to feeders along Gary Oaks Drive in Nanoose Bay.