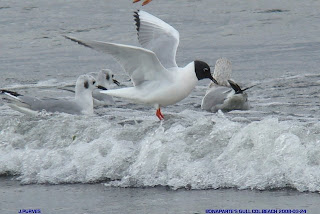 The Wednesday Bird Walk went to Ten birders found forty-five species of birds. The highlights of the morning included the sighting of the first Turkey Vulture of the season. We saw steady streams of Black, Surf, White-winged Scoters and Long-tailed Ducks flying up and down the A large raft of Red-breasted Mergangers and Long-tailed Ducks were seen not far from shore. We saw several Red-crossbills on the beach in front of us and Golden-crowned Kinglets kept us entertained as they moved very quickly and hawked insects on the low bushes along the forest trails.

The Backyard Wildbird & Nature Store's weekly bird walk in the Parksville/Qualicum Beach area is on Wednesday mornings at Participants meet at the Parksville Visitor Centre at Highway 19A and in Parksville at Snow, rain and/or heavy winds will deter us--but we will plan a walk for every week. Everyone is welcome to bring their binoculars and join us for a morning of birding. For the weekly location of the birdwalk, please call Neil Robins at (250) 954-1928 or the Backyard Wildbird and Nature Store at (250) 390-3669.