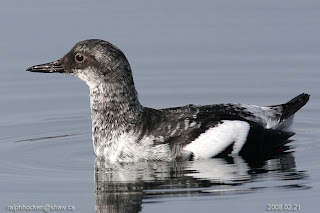 
The Wednesday Bird Walk went to near French Creek. Twelve birders found forty-three species of birds. The highlights of the morning included the sighting of two flocks of Trumpeter Swans flying up the and one Pigeon Guillemot with a small flock of Common Murres heading down the A large raft of Surf Scoters, Long-tailed Ducks, Pacific Loons and Brandt’s, Pelagic and Double-crested Cormorants were seen in the choppy water not far from shore. We spotted several Western Gulls in with the thousands of gulls on the gravel bars near shore.

The Backyard Wildbird & Nature Store's weekly bird walk in the Parksville/Qualicum Beach area is on Wednesday mornings at Participants meet at the Parksville Visitor Centre at Highway 19A and in Parksville at Snow, rain and/or heavy winds will deter us--but we will plan a walk for every week. Everyone is welcome to bring their binoculars and join us for a morning of birding. For the weekly location of the birdwalk, please call Neil Robins at (250) 954-1928 or the Backyard Wildbird and Nature Store at (250) 390-3669.