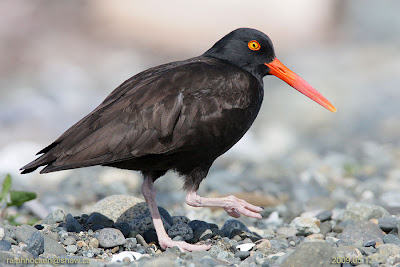 Sunday January 24, 2010:
The Sunday bird walk went to Shelly Road side of the Englishman River Estuary. It was a windy, dull morning, but pleasant enough for birding. The highlights included seeing a Merlin perched in a tall Alder Tree at the start of the walk. A Red-tailed Hawk was perched all morning overlooking the estuary. We watched as a Peregrine Falcon flew in and circled to land in it's usual perch. We noticed another Peregrine Falcon circling above the first perching Falcon.

Friday January 22:
A Varied Thrush was seen in a backyard in the 2500 block of Glenayr Drive in Nanaimo.

Thursday January 21:
A Merlin was spotted in the 2500 block of Glenayr Drive in Nanaimo.

Wednesday January 20:
A Cooper's Hawk was seen in the 2500 block of Glenayr Drive in Nanaimo.