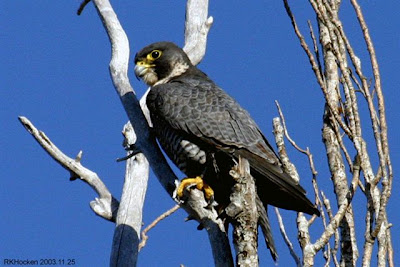 The Tuesday Bird Walk went to the Shelley Road side of the Englishman River Estuary in Parksville. The 12º morning was partly cloudy with calm winds--a great morning to be birding.
The highlights of the morning included seeing a Peregrine Falcon looking down at us from a high perch on a snag as he preened himself. As we watched, he was joined by another Peregrine Falcon on a nearby snag. We spotted four mature Bald Eagles along the Estuary. A Sharp-shinned Hawk flew to a perch high up in a Fir Tree. A Red-tailed Hawk was perched on a snag overlooking the Estuary. A small flock of Golden-crowned Kinglets and Ruby-crowned Kinglets gave us spectacular views as they gleaned insects from some low small shrubs about four feet from us.
A Merlin made a quick appearance, while we doing the tally at the end of the walk, making the total predators of the morning five!